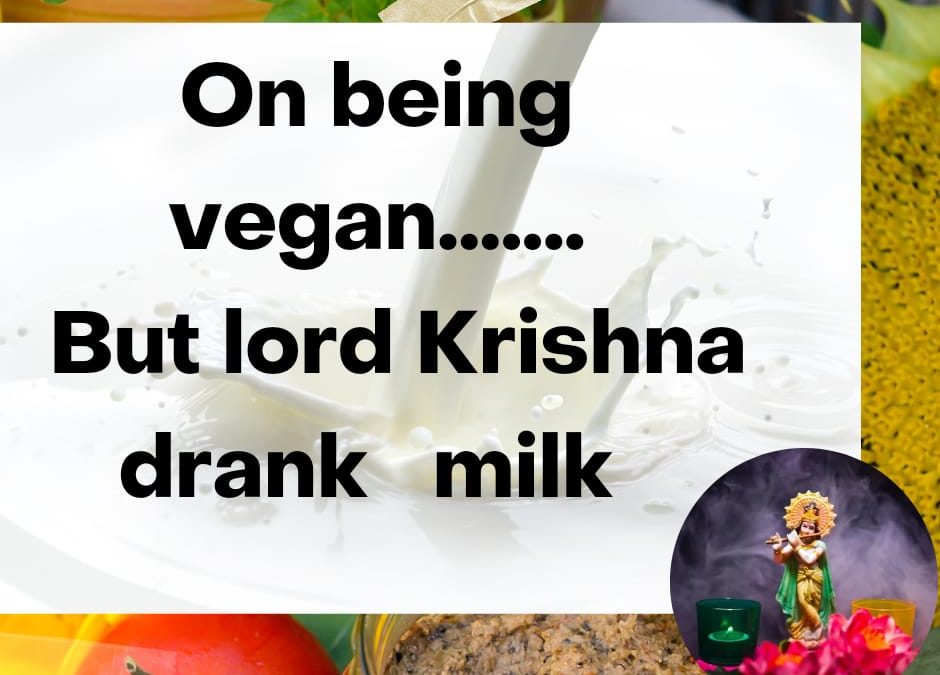 When it comes to veganism many people put forth the fact that Lord Krishna use to drink milk and eat butter, he didn’t follow anything like veganism, then why should we. In India most people blindly follow our old mythological belief so this point is hard to argue with. People should realize that humanity has evolved so it’s ok to follow new norms and believe new rituals.

This “excuse” for still consuming dairy cannot be justified. That is because during the era of Lord Krishna there were no such thing as social justice movements, animal rights or the belief of ‘animal consent’ for taking their milk or the awareness that we are not “entitled” to their products. And also Lord Krishna was a shepherd (gwalla) and hence he treated animals as a part of his family. The mass production for the purpose of business was nonexistent back then. The ‘social justice’ came into practice post ‘Dwaparyuga’ which is the era of Lord Krishna. The social justice practices that promotes equality among all living creatures despite their gender, societal class, physical/mental abilities, appearance etc and now even ‘species’, slowly being considered as a form of discrimination called ‘speciesim’.
During Lord Krishna’s era the threats of environmental destruction and carbon emissions were not known. There was no deforestation, no pollution and especially no artificial insemination of cows to increase their population for milk extraction like how it’s happening in today’s world. Today the dairy industry is responsible for huge amount of Green House Gas (GHG) emissions which was nonexistent during the ‘Dwayparyuga’. Today it is not possible to have sustainable dairy operations because it will generate very low economic benefits, so it has to be done unsustainable way but only if there is a need for it. If everyone on this planet turns vegan then there will be no need to run these unsustainable and non environment friendly dairy operations.

If Lord Krishna was on this earth in this era, it is most likely that he or any other god will be against the violence that is happening right now. Mythology accounts for ‘divinity’ and all the gods fought for righteousness and it would have been same in the current era. Then, the humans were entrusted with the responsibility of protecting the vulnerable, they were loving, compassionate towards every living creature. But today it is hard enough for humans to be compassionate for each other and animals are of course always out of the compassion circle. Lord Krishna, who always rooted for love and peace would have surely found all the animal practices in current times as unjust and inhumane.