If Every Human on Earth Turns Vegan, Won’t it Create a Problem in the Food Chain? 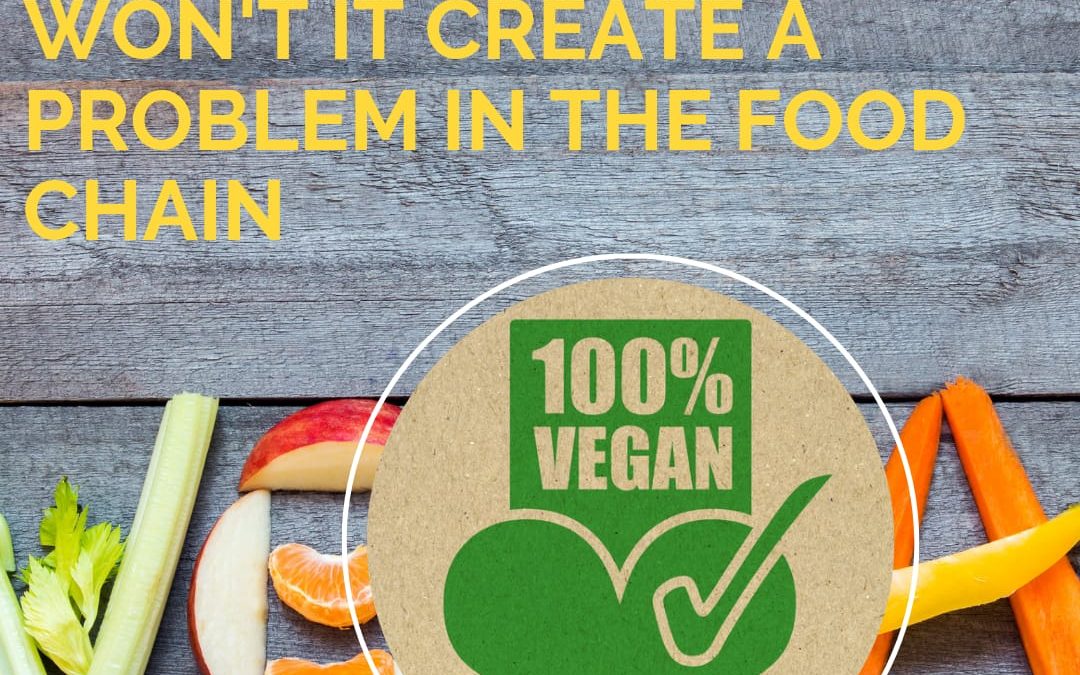 People are continuing to gorge on animal meat because they believe it is what nature demands. That it is natural the smaller species are eaten by larger ones and it is important for the food chain. The thing is that people are not able to differentiate between need and greed. Earlier, it was a need; humans ate animals for the sake of survival unlike today’s educated fools (who have plenty of options but still eat meat) they didn’t have many options. They had no knowledge of what food or nutrition was. They just consumed whatever was available in the surrounding and were therefore a part of the ecosystem. Today, even with so many vegetarian and vegan options people are tempted towards eating animal flesh. It’s no longer a “need” to eat animals as we can easily survive without it; it is on the contrary the human greed.

A food chain is where all the species are interdependent. They are interdependent for the purpose of survival; it’s not the same today. How can animals be dependent on humans who feed them, raise them, then torture and slaughter them for their satiety? The humans who artificially inseminate animals to increase their breed and make money out of their vulnerability? No! The food chain can no longer be called a chain. It has become a food pyramid with man at the top, exploiting every other living being below him. If we really believe that killing and consuming animals in such large amounts is natural and that all the species on this planet are interdependent. Then why is it not ok the other way around? Symbiosis is meant to be a two way street. If we call killing animals natural then why don’t we react the same way for animals attacking humans? Whenever we come across a news headline that says “40 year old man killed by tiger attack” our immediate reaction is not “Oh! That’s natural” instead we feel bad for the man and then try to do everything in our power to kill that tiger or ban him from the area and protect the area. If this is not natural then it should be the same other way around. There exists no ‘food chain’ because there is no interdependency left in it hence human’s justification for continuing harsh animal practices by calling it “natural” is invalid. ‘Food chain’ has just become a utilitarian construct to continue the practices and increase the world’s capitalism.

Adopting veganism can really turn this scenario
A non-living lifestyle uses too much resources including food, land and water. Acres of land are required for the artificial breeding of animals and ton of harvest required to feed those animals. Now if we remove animal breeding from the picture the world would seem like a magnificent dream with beautiful greenery all around, fresh breeze and water (as animal agriculture also contributes to pollution) and plenty of food just for human consumption (and not wasted on breeding animals).
We all have recently witnessed the beauty of nature that outshined during the Covid 19 pandemic. Since there were no humans there to exploit, we saw clean water, clean surroundings and animals roaming on the streets, it was marvelous indeed. However there is a possibility for the world no forever become like that if everyone on this planet turns Vegan. If animal agriculture practices ends entirely then that will push the nature to go on its natural course. The resources will be available in abundance and there will be peace, harmony and ecological balance.