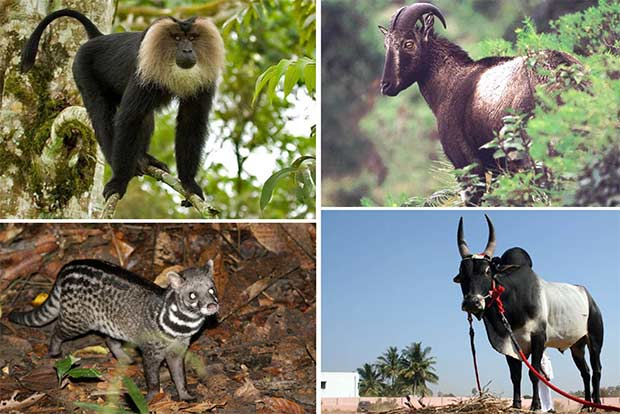 The Nilgiri tahr is a stocky goat with a bristly mane and soft, coarse hair. Males grow to be
larger and darker in colour than females. Both have curved horns that can exceed 40 cm in length
for males and 30 cm in length for females. Males weigh 80 to 100 kg and stand about 100 cm tall
at the hip. Saddlebacks are adult males that grow a light grey patch on their backs. By the end of
the twentieth century, only about 100 Nilgiri tahrs remained in the wild.

Only India is home to the Nilgiri Tahr. It lives in the South Western Ghats’ open montane
grassland habitat. The woods open up into vast grasslands interspersed with patches of stunted
forests, locally known as sholas, at elevations ranging from 1,200 to 2,600 metres. The Nilgiri
tahrs used to roam these grasslands in vast herds, but trapping and hunting in the nineteenth
century limited their numbers.

Since then, their numbers have risen slightly; according to a detailed report conducted by the
WWF-India, the population of Nilgiri tahrs in the Western Ghats now stands at 3,122. Their
distribution spans over 400 kilometres (250 miles), with Eravikulam National Park housing the
most significant population from north to south. According to a wildlife census conducted by the
Kerala Forest Department in collaboration with volunteers from the Kerala Agricultural
University’s College of Forestry and Veterinary Science.

The Asian elephant, also known as the Asiatic elephant, is the only living species of
Elephas and can be found throughout the Indian subcontinent and Southeast Asia, from India to
Nepal in the north, Sumatra in the south, and Borneo in the east. The Asian elephant is Asia’s

most significant live land mammal. It has been listed as Endangered on the IUCN Red List since
1986, owing to a population loss of at least 50% over the last three elephant generations, or
around 60–75 years. Loss of forest, habitat destruction, deforestation, and poaching are the main
threats. In 2019, the wild population was projected to be 48,323-51,680 individuals.

In addition to cultivated and secondary forests and scrublands, Asian elephants live in
grasslands, tropical evergreen forests, semi-evergreen forests, wet deciduous forests, dry
deciduous forests, and dry thorn forests. Elephants can be found in a variety of habitats, from sea
level to over 3,000 metres. They frequently travel above 3,000 m in summer at a few sites in
northeast India’s eastern Himalaya. During the 1970s and 1980s, the demand for ivory,
especially in East Asia, led to widespread poaching and elephants’ disappearance in both Africa
and Asia.

Macaque with a Lion’s Tail:-

The lion-tailed macaque lives in the rainforest and is diurnal, meaning it is only active
during daytime hours. It can climb well and spends much of its time in the upper canopy of
tropical moist evergreen forests. It, unlike most macaques, avoids humans wherever possible.
The lion-tailed macaque behaves similarly to other macaques in terms of social activity, residing
in organised groups of 10 to 20 members.

The lion, The Tailed Macaque, derives its name from the shape of its tail, which resembles
that of a lion. This is mainly seen in Tamil Nadu and the states surrounding it. The fundamental
causes of extinction for this rare animal species are the destruction and reduction of forests to
agriculture. The natural environment must be protected, and afforestation must be facilitated.
According to a recent IUCN assessment, 3000–3500 of these species live scattered throughout
Tamil Nadu, Kerala, and Karnataka.

The lion-tailed macaque is one of the world’s rarest and most endangered primates.
Agriculture, the spread of tea, coffee, teak, and cinchona, the building of water reservoirs for
irrigation and power production, and human settlements to sustain such activities have all led to

their range’s isolation and contraction. Plantations are not where they live, eat, or fly. The loss of
their habitat and their avoidance of human interaction has resulted in a significant decline in their
numbers.